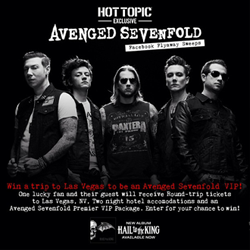 Avenged Sevenfold At Pain In The Grass – Photo Round-Up.