Uth Magazine have put up their review of Avenged Sevenfold’s concert in Abu Dhabi as well as photos from the show.

I must admit I am not a huge fan of the Metal genre, this was my first metal concert experience and yet there was nothing to stopping me from getting involved in the crowed. Metal concerts are definitely very physical, for both the performers and the crowed and I was right in the middle of it. A huge mosh pit was formed involved loads of pushing and shoving and a huge carousel which sounded the alarms for the Security. The screams from the fans often drowned the performance and yet you could easily see why this band won the Golden Gods Award (Metal Hammer Magazine) in 2011 for the best drummer, best guitarists, best vocalist and the album of the year.

There was just one thing I hope was different about this even and that is the timing. Several fans missed out on the opportunity, mainly school and university students because of upcoming exams, coupled with the fact that Yas marina is at quiet a distance from many devout fans in Dubai and other northern emirates. Only the totally diehard fans were to be seen. None the less it was a great event. For the rest of you stay tuned for many more events coming up. 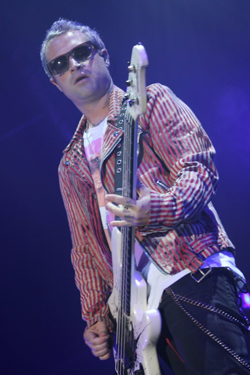