The Summer Of Sevenfold. - Avenged Sevenfold

Are you ready for The Summer of Sevenfold? Avenged Sevenfold have a lot up their sleeves this Summer beginning with performances at some of the biggest festivals on earth in Europe and the UK, they’ll take over the Rockstar Mayhem Festival and end with Summer Sonic in Japan. They’re also preparing to launch their first game Hail To The King: Deathbat which is “catching the attention of those who thought it impossible for a band to create a fun, serious and epic action/adventure game” and fans will also be taken inside the bands humble beginnings with a special anniversary re-release of “the album that helped define us” with never before seen footage and demos. 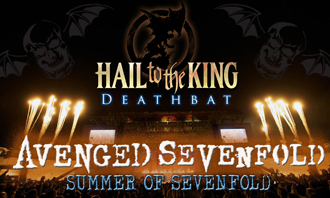