UPDATE 1/19: That Metal Show‘s Season 13 premiere episode featuring M Shadows can be streamed (geographical restrictions may apply) here. Matt (9:40) speaks about how Avenged Sevenfold celebrated their #1 albums, the criticism that comes along with success and how he handles it, Hail To The King: Deathbat, if he could be in any other band which would it be, the one song he wish he wrote, his one vice, the best concert he’s ever attended, the first album he bought with his own money, who he thinks is the better vocalist between Freddie Mercury and Robert Plant and more. Zakk Wylde also complimented the band’s success saying, “the success that Avenged Sevenfold has is just great for the whole hard-rock community and rock community in general.” 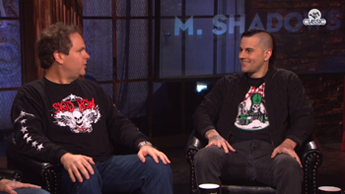 1/18: That Metal Show has posted bonus content from their season 13 premiere episode taping. In ‘Avenged Sevenfold carries the Metal Torch’ and ‘Zakk Wylde and M. Shadows Put (the Rest Of) It on the Table’ Matt touches on carrying the metal torch, the first song he learned how to play on guitar, the weirdest rumor he’s ever heard about himself and his favorite new band. In the ‘Backstage Interview: M Shadows’ he talks about his first concert, malfunctioning fog machines, his pre-show rituals, weirdest fan requests, what album he would take on a deserted island and gives advice to aspiring rockstars. He also chats with Jennifer in her ‘Miss Box of Junk’ segment about his diet plan and what he listens to when he works out.