Soundwave Touring are hosting a contest to win an awesome Avenged Sevenfold prize pack. By entering you’ll be in the running to win these Avenged Sevenfold items: signed sidewave posters, hail to the king boxiest, signed “Hail To The King” CDS, “Nightmare” special edition and a CD pack featuring “Hail To The King,” “Nightmare,” “City Of Evil” and patches. You’ll also win goodies from Five Finger Death Punch and Asking Alexandria. You must be an Avenged Sevenfold sideshow ticket-holder in order to claim the signed items. Contest ends March 2nd at 11:55pm. 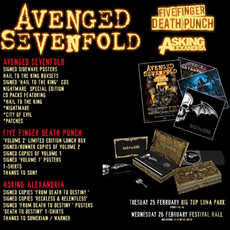