Sight of Sound Magazine posted a review and photo gallery from Avenged Sevenfold’s show in Hershey, PA. Hershey’s photo round-up can be found here. M Shadows was also interviewed by Harrisburg’s 105.7 The X a week prior to the show.

As a whole the night was perfect metal show; the stage set up was legendary, the performance in terms of quality was spot on and had next to no flaws, the pyro was scorching and every fan left satisfied. I am excited to see what Avenged Sevenfold brings on the road with them for Mayhem Fest. […] Only time will tell, this band is at the highest point of their career right now and I don’t think there is anywhere left for them to go but up. Time and time again they have shown they have the chops to be the best in the business and that has paid off building their reputation and their fan base to the size it is now. The Shepherd of Fire tour will be long remembered in Hershey and all of Pennsylvania and could easily be one of the best tours to hit the area this year. The bar has been raised, can anyone top it? 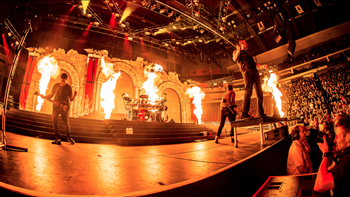