Seether’s Rise Above Fest will bring Avenged Sevenfold to the Darling’s Waterfront Pavilion in Bangor, ME on May 10th. The Rise Above Festival is an annual event created by Seether frontman Shaun Morgan, that aims to raise awareness about suicide prevention and mental illness with proceeds benefiting SAVE (Suicide Awareness Voice of Education). Morgan says Avenged Sevenfold were quick to join the cause, “A couple of those guys actually have told me ‘Rise Above This’ is one of their favorite songs, so it had a sort of serendipitous feel.” 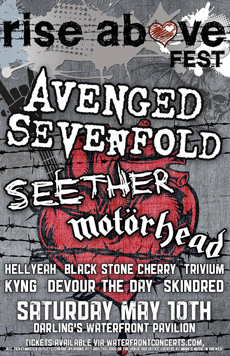