The People’s Choice 2014 Nominee Selections have been announced and Avenged Sevenfold are in the running to be nominated for “Favorite Alternative Band.” You can vote for the band here. You can vote until October 31st. Winners will be announced and voting for selected nominees will be begin on Nov 5th. 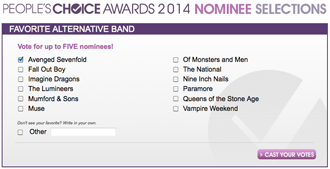