Kerrang! have opened up the nominations for the Kerrang! Awards 2012. Avenged Sevenfold, including separate members, can be nominated for quite a few of the categories like “Best Single*,” “Best Live Band,” and “Best International Band.” While we’re at it, lets support some of the family by nominating Brian Haner Sr for “Best Comedian” and the Rockstar Uproar Festival as “Best Festival.” – *When voting for “Best Single” try to stick with the 2011 release “Buried Alive.” 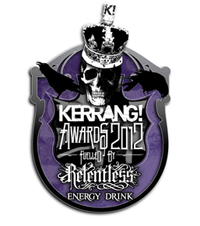