Music Tour Reviews have put up a lengthy review and large photo gallery filled with many compliments and great shots from Avenged Sevenfold’s performance at the Orion Music + More Festival.

M.Shadows was all over the stage and under his bandana and cap, you could see his hair growing long from the time off; his voice was on point and sounded great. Zacky Vengeance & Synyster Gates joined several times to play to the crowd. Gates, as always, in his playful mood as he made faces as he looked down to the photographers. Johnny Christ and Arin IIejay provided the tight drumming and bass playing A7X is known for. Seeing them all so close got the crowd into it, as mosh pits tried to form in the packed grounds.

Going past their set time, they came out for an encore of Unholy Confessions. By this time, I was waiting by the stage Metallica was going to be on and noticed not many people had left the side stage, leaving the main stage sparse with people. Once more fireworks went off as A7X finished up, leaving the crowd wanting more and making their mark at the Orion Festival that only one other band could match and beat Metallica. 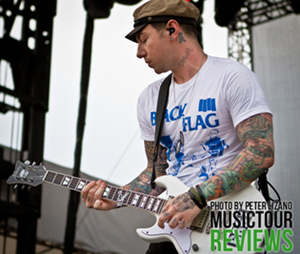