Avenged Sevenfold will grace the cover of the new issue of Metal Hammer out next week. They’re promising that this is the “biggest and best Avenged Sevenfold story you’ll read anywhere this year” so check back tomorrow for details.

UPDATE: Metal Hammer preview their interview with Avenged Sevenfold in the new issue. You can pre-order your issue here. It’ll hit newsstands on July 23rd. You can also purchase the copy digitally on Google Play here.

Avenged Sevenfold share some pretty lofty ambitions with us in their huge cover feature in our new issue, and it turns out that they have the biggest UK rock and metal festival in their sights…

“We really, truly believe in metal,” says frontman M Shadows. “We grew up on the altar of bands like Maiden and Megadeth and Pantera and Metallica, and if bands that are younger could look up to us like that, that’d be the hugest compliment of all time. We want to headline Download. We want to play Rock In Rio. The goals aren’t to have millions of records, it’s to be the top of our game in our generation.”

Not to sound like a total dick, but there’s not a lot of bands that are ready to carry the torch,” adds guitarist Synyster Gates. “I honestly feel like we’re that band. When you start a band it’s totally fun and games, and it’s all fun now, but there’s no more games. We’ve had fun, now we want to make a mark. Now, it’s ‘Let’s make history’.” 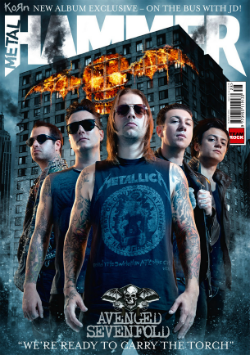