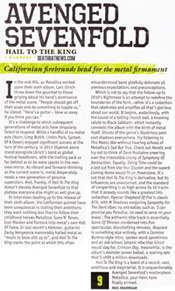 Soundscape Magazine Gives Avenged Sevenfold's "Hail To The King" An 8 Out Of 10.