Avenged Sevenfold are featured in the July 2014 issue of Metal Hammer with M Shadows on the cover. In it, Metal Hammer takes a trip down memory lane with the band and find out more about getting into trouble as kids, M Shadows and Synyster Gates’ first times meeting Jimmy “The Rev” Sullivan, recording Sounding The Seventh Trumpet (Shadows adds, “We just wrote a bunch of songs, but we didn’t know anything about recording or click tracks or production, so we just wrote songs that a bunch of 17-year-olds would write.”), who said they would never work with Avenged Sevenfold, their first time playing abroad, the incident at The Crobar that got The Rev arrested,  the decadence and controversy of the City Of Evil era (read brief excerpt by clicking on quote below) and becoming the Kings of metal. The issue is out NOW on newsstands around the world. Purchase the issue online or through the Google Play store to read the entire feature. You can also check out behind-the-scenes photos from the photoshoot here. 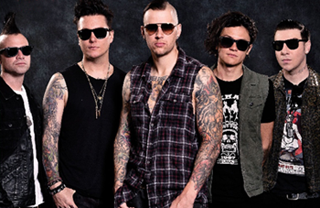 “We sent our original record to Andy Sneap [Megadeth and Killswitch Engage producer/mixer/genius], and he wrote back an email saying, ‘I will never work with you guys’,” laughs Shadows. “Ha! It’s funny because after City Of Evil, we saw Andy in London, and we were laughing about the whole thing. He was like, ‘Dude, I didn’t know it was gonna turn into this! I feel so bad!'”

Different Rhythm: Arin Ilejay, Avenged’s baby brother dumber, dishes the first on the band’s more, ahem, restrained current lifestyle: So there’s no mischief happening whatsoever now? “Well, I remember that on the first tour I ever did, me and Johnny were sitting in a hotel room, hanging out, having a few drinks, and Johnny was leaning back in a chair. Brian was holding him, and they’re all taunting each other, like ‘I’m gonna drove you man’, ‘Do it man, whatever.’ He fell back, bashed his head and he had a huge gash. We had to take him to the hospital, he was bleeding everywhere. It was bad.”

In late 2005, during the interview that accompanied their first ever Metal Hammer! cover – a striking, Sin City-inspired spread – the band made some inflammatory political remarks that still shadow many people’s perception of them to this day. Openly voicing his support for George W Bush’s controversial regime and stating an opposition to gay marriage, Shadows hardly endeared himself to metal’s more liberal quarters… “I think there are always gonna be people that look back on that,” opines the singer with a sigh. “It’s a little cringe-worthy, but when you’re a young kid you have the right to be stupid sometimes, and I think that when we were that age, we had so many different points of view. Not to get back into politics, but I’m about as socially liberal as you can possibly be, and I think people don’t really realize that about this band. We’re the kind of people that think you should be able to do whatever you want on this planet, and no one should be able to tell you differently, as long as you don’t hurt somebody else. I think those interviews were done with a bunch of young guys that were very strong-willed and just wanted to get their opinion out there, when it doesn’t necessarily represent the band now.” […] “It’s kinda hard to look back on those things, honestly,” adds Johnny with a grimace. “Some of those quotes, it’s like, ‘Ah man…’ Even at the time when it came out, we were like, ‘Did we really say that?!’ At the end of the day, you gotta laugh about, ’cause we were just kids getting our first real taste of success globally. You live and learn, and you have fun with it.” With the band all in such endearingly candid form, now is as good a time as any to put down that 10-year-old elephant in the room. So then, chaps. do you still oppose gay marriage? “Oh, no. Not even close,” shoots back Shadows without a second’s thought. “Honestly, I don’t give a shit what you do with your life, and I don’t think anyone else should care what anyone else does with their life.” […] “We’re all for equal rights,” confirms Syn. “I just want to make that completely clear.”

It’s been a steady but relentless learning curve for the band that has resulted in them arriving in 2014 as one of the most fully formed rock ‘n’ roll acts of recent times. And who would have seen that coming? “We realized that people had a certain perception of us, and we didn’t necessarily want that anymore,” says Johnny of the band’s evolution from snotty metalcore brats to wizened metal veterans. “We weren’t ashamed of it or anything, but it definitely wasn’t how we wanted to be portrayed.” “It’s interested growing up in some sort of media eye,” muses Shadows. “We’ve kept ourselves away from mainstream press, but at the same time, I still go back and read things we’ve said in Metal Hammer and I cringe. But, that’s part of life. I know some people will stick with those opinions of us forever, and they’ll say, ‘That’s what these guys are and they have no right to grow up.’ That’s not reality, so what we do is ignore everybody, have our inner circle of people that we trust, our families, our friends, and we do what we wanna do. That’s how we’ve lived it.”

It’s an attitude that has, in the long run, plainly paid off. Avenged are, beyond a shadow of a doubt, the biggest band in our world right now, and more importantly and despite the cynics’ best wishes, that is no flash-in-the-pan achievement. It’s the result of hard graft, tough life lessons, a large does of tragedy and most crucifying of all, a lot of growing up. So, then, young Matthew; when exactly was the moment you realized that a bunch of boisterous friends from Huntington Beach had come good on those cocky promises of world domination from yesteryear? “Not to be a complete asshole, but I don’t think we’ve done it yet,” insists the frontman with a sniff of humility. “We’re still getting there and we still have a lot of cool stuff ahead. I wanna really push this thing and play music for as many people as possible, and I wanna do it on our terms. Maybe when we walk onstage, headlining the Friday at Download. Maybe that might be the time.” If that is indeed the time, then it feels ill-willed to begrudge them. Hell knows they’ve paid their dues.

Mike Portnoy Happy That Avenged Sevenfold "Have Blossomed To A Whole New Level."