Loudwire’s Mary Ouellette has written a review of Avenged Sevenfold’s concert at the Mohegan Sun in Uncasville, CT with some wonderful photos she took accompanying the article.

Starting their set with the title track from their 2010 disc ‘Nightmare,’ Avenged Sevenfold unleashed a 12 song, 90-minute assault on the audience who clearly couldn’t be any more ready and willing to soak it all up. It might be cliché to say but an Avenged Sevenfold show exemplifies everything a rock show should be from pyro to gratuitous guitar solos, to circle pits, crowd participation and yes, even fireworks. The energy was not only permeating but downright transforming, it was hard to be under that roof and not be a convert to the church of Avenged Sevenfold. 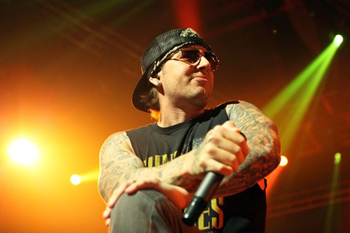