In Rolling Stone’s Special 2012 Summer Extra Edition featuring Metallica, Lars Ulrich speaks a little about the upcoming Orion Music + More Festival. When asked what part of Orion Festival he could take credit for, along with naming a few other bands, this is what he had to say about getting Avenged Sevenfold on the bill:

“Avenged Sevenfold are very near and dear to me. They were on the fence about it. They were taking the summer off. I called one of the guys and said ‘It would really mean a lot to me.'” – Lars Ulrich 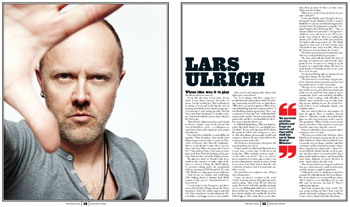 Thanks Ashley for sending this in.

Avenged Sevenfold Mentioned In Pantera's Look Back At 20 Years Of "Walk."

Vengeance University Want To Make You A "Baller."