After being featured on Kerrang! just a few weeks ago Avenged Sevenfold were back on the cover again this past week. Kerrang! detailed the difference they saw between Avenged Sevenfold in 2006 and Avenged Sevenfold in 2013 before talking to the band about Avenged Sevenfold deciding to strip things back and write a more groove-oriented album after doing five that are over-the-top and crazy, “Hail To The King” being the next level for the band, being brutally honest with each other during the writing process, how losing Jimmy “The Rev” Sullivan changed them, being more realistic about how the world works now, feeling like they have less to prove but still being ambitious, being older and wiser and more.

There’s also a “Meet The New Guy” feature with Arin Ilejay where Avenged Sevenfold’s new member talks about going from having a day job to playing arenas, how he felt before his first show with the band, hanging back during the record of “Hail To The King,” being worried about not living up to Jimmy “The Rev” Sullivan’s ability and the gig being a dream come true for him. Arin states, “The guys told me they wanted to give a young drummer a chance to build his own legacy. They told me this was my big chance. They were really supportive. It wasn’t about filling The Rev’s shoes – it was about making my own mark.” 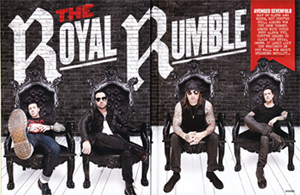