The Lifestyle section of the Inquirer in Manila have put up their review of Avenged Sevenfold’s performance in the Philippines as well a few photos from the show.

I never thought that it would be possible to actually see A7X perform here in the Philippines. I’ve only seen their concerts on YouTube, and even with the onslaught of foreign acts coming to Manila, I never imagined that A7X would be one of them. They’re not mainstream and not all people are familiar with them, much less their songs. However, seeing the crowd inside Smart Araneta Coliseum, I saw that they have plenty of loyal supporters who knew every song in their repertoire. Each person inside the Big Dome that night was a fan. And by the end of the show, each one had one of his/her dreams come true.

Avenged Sevenfold never fails to give the best performance in every city they are in, and Manila was not an exception. They won the 2012 Revolver Golden Gods Award for Best Live Band and, judging from what they showed Manila that night, they deserved it.

Each member of the band displayed the very definition of showmanship, constantly giving their all in what they do. M. Shadows sang flawlessly while enthusiastically moving around the stage. Zacky Vengeance got a brassiere thrown at his feet by an ardent fan; with his good looks and talent, what can you expect? Johnny Christ was a sight to see with his purple dyed hair, slapping his bass with precision. Arin Ilejay was equally talented, giving life to the drum tracks that the late drummer, The Rev, had created. And, of course, Synyster Gates was unrivaled in his blistering solos. There wasn’t one moment where he missed a single note, with all that shredding and moving around. It was unbelievable. When I finally saw live the popular V-formation guitar duels that only he and Zacky V can do, I was in awe.

As the night ended, so did the moment where the earth stood still for 45 minutes and allowed me to live out one of my fantasies. They didn’t need fire onstage to create a fiery performance. With their intensity and sheer talent, Avenged Sevenfold was able to give Manila a truly unforgettable, blazing performance. 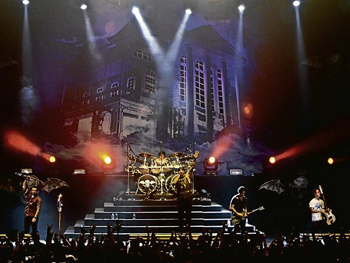