Synyster Gates was interviewed by Infectious Magazine at his Guitar Center Master Class and spoke about which guitar player he would choose to do a Master Class with, what he was looking for when choosing the winners, what he was hoping to accomplish with his Master Class, what he believes makes a great guitar player, if he ever feels like he stops learning guitar work, touring with Korn on Mayhem Festival, Avenged Sevenfold mixing up their set on the festival and headlining Download Festival. Photos by Infectious Mag be seen here. Video of Gates playing an original composition he wrote specially for the Master Class and his own improvised take on gypsy-jazz player Django Reinhardt’s “Minor Swing” can be seen here.

Avenged Sevenfold has been touring pretty extensively, how are you going to mix up your set for Mayhem?
Syn Gates: We’ll try and switch it up, as basic as that sounds. As far as the set, we’re definitely going to put out a bigger, better show so to speak. Hopefully a little bit longer because I know we get complaints about that. Longer, better, bigger.

What about Download Festival, A7X is headlining one of the days, what’s that going to be like?
Syn Gates: It’s going to be fucking awesome! From our standpoint? Fuck, it’s the coolest thing ever. We haven’t really headlined a big, overseas festival. It’s definitely the biggest festival, the biggest show that we have headlined. And to have it be such a legendary and historical sort of thing, I mean ACDC has headlined it, last time I was there and saw it, they had System of a Down, I mean – it’s legendary! Way too cool. 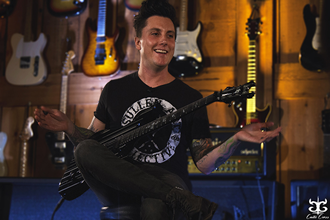 Avenged Sevenfold's Shepherd Of Fire Tour Stage Production Said To Be "Out Of Control."