Guitar World have posted a a small write-up and photos from Avenged Sevenfold’s set at Orion Music + More Festival.

On Sunday night, Avenged Sevenfold capped off the action of the festival’s Fuel stage with a fiery set of hit after hit. While drawing a slot right before Metallica wasn’t exactly ideal this past weekend (Just ask Arctic Monkeys), Avenged managed to draw perhaps the second-largest crowds behind the festival’s hosts, thanks in part to their trademark, energetic stage show — not to mention enough fireworks for a small 4th of July celebration 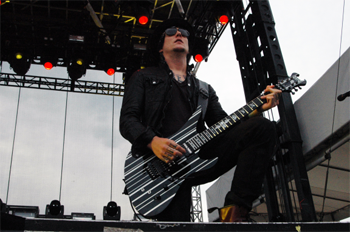