Guitar World posted an excerpt from their interview with Zacky Vengeance and Synyster Gates published in the magazine’s October 2013 issue. They’ve also shared an exclusive photo gallery from the duo’s session with photographer Justin Borucki for their feature. Guitar World has also reviewed the Schecter USA Hellwin 100 Guitar Amp complete with video.

Apart from a short international tour of Southeast Asia and other far-flung locales in early 2012, and an appearance at Metallica’s inaugural Orion Music + More festival, Avenged spent much of the last year in hibernation. In the fall, they found time to cut one new song, a bracing, Euro-style power-metal throwback called “Carry On,” which appeared in the video game Call of Duty: Black Ops II.

But if any fans took that as a harbinger of the group’s new musical direction, they were sorely misled. Hail to the King is a different animal entirely—not just from “Carry On” but from any of the band’s previous albums. On recent offerings like 2005’s City of Evil, 2007’s self-titled effort and Nightmare, Avenged seemed to take pleasure in packing as much rollercoaster riffage, racing dual-guitar harmonies and double-bass drum-fueled rhythms as possible into every piece of music.

But on Hail to the King, they opted to strip things down. “The goal was to focus more on the groove and the songwriting and the arrangements,” Gates says. “We wanted to create space instead of just filling every song up to the brim with shit—to keep that same depth, but without having to always have four bridges and three choruses and multiple vocal harmonies and guitar duels everywhere.” 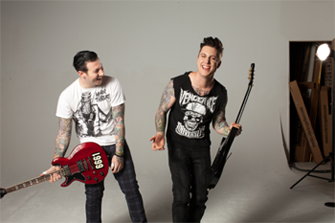