I had a blast last night at the “Welcome To The Family” Tour in Lafayette, LA where I got to meet some Deathbat News readers and had a great time spending the day with them.All of the group have Anita, the mom of the group, to thank for helping everyone out as much as she did. She made the night extra special for a group of kids which included Ceila (pictured below) who drew an awesome picture of Jimmy “The Rev” Sullivan. Also met Jake who attends LSU so we had another mutual love as we’re both big LSU Tigers football fans. Dori, Donnie and Lauren who were an absolute blast to hang with. Last but not least, Sam, Nicole, Liv along with all the other readers who were all awesome to meet. 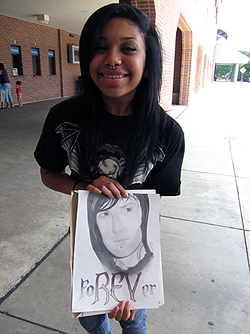 It was time for the show to start and while everyone headed in I waited out front to grab my photo-pass for the show. Once in I stood at the FOH and watched as the crowds poured in until the show started. Bullet For My Valentine and Three Days Grace played their sets and while the crowd enjoyed it everyone was waiting for the headliners. Avenged Sevenfold never disappoint and this tour surely proves it. From the moment they stepped onto the stage to the moment they stepped off the place was on fire, pretty literally. The performance was phenomenal and again you could tell most of the crowd was there for them. For every 10 Avenged Sevenfold shirts you saw there were 2 for the other bands playing. “Fiction” was beautiful and “Save Me” was the song I had been dying to see live and it left me wowed. The incredible experience continued on over the course of the night until it was time to head back home and for the tour to head off to the next destination.

I want to send my Thank You’s to Avenged Sevenfold and the A7X Crew for their generous hospitality. I am so grateful for the night I had. And, to Warner Brothers Records for setting me up with a photo pass for the show which gave me the opportunity to something I love and capture the band doing what they love in front of thousands of fans. I could never explain how proud I am and how much respect I have for this group of men. 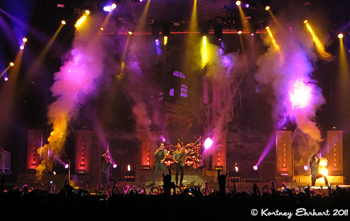