Crave Online shared more interview highlights from Synyster Gates‘ Guitar Center Master Class. Some new topics, not found in the Infectious Magazine piece, include learning guitar and theory, knowing if Avenged Sevenfold would have such a guitar driven sound during the bands early stages, Avenged Sevenfold being a dual-guitar oriented band, how he went from studying jazz guitar at MI to Avenged Sevenfold, swapping guitar licks with guitarists from different bands and playing smaller hometown venues.

When Avenged was starting out, were there any inklings that the sound would be so guitar driven or that you and Zacky Vengeance would become such an integral part of the band?
SG: I don’t know if that type of perspective was there at that time, but definitely, it was a guitar driven band. When Matt writes a song, he’s writing on guitar. When Jimmy was alive he was writing for Avenged on the guitar, mainly. We borrowed elements from our old band Pinkly Smooth. We have songs like “Fiction” or “Little Piece of Heaven” are very much him on the piano doing his thing, but songs like “Brompton Cocktail” and “Afterlife” — those are very much Jimmy sitting down on the guitar. Everybody comes from a punk rock band, everybody’s had a guitar in their hand at a certain point [either] leading a band or their own entity. So it made sense. I knew it was going to be guitar oriented.

And you knew it was going to be a dual-guitar oriented band?
SG: Not at very first, when we started writing we all liked the dueling guitars. Everything had to be harmonized. Layers and layers. I mean, if you listen to City of Evil, it’s fucking layers and layers of harmonies at all fucking times. Whether its vocals or guitar or just strings — everything was filled to the brim with harmony. So we’ve smoothed that out and filtered it out. But yeah, we always liked it whether it was Queen doing it, or Mr. Bungle, Matt’s a big Bad Religion fan, NOFX— stuff like that. It was all harmony-based. My favorite punk rock song is “Linoleum” by NOFX. That’s pure harmony, the coolest chord changes… That type of shit was completely awe-inspiring and monumental in the development of Avenged. 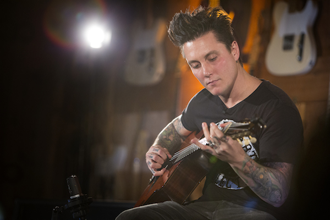