Cooperative TV sat down with M Shadows ahead of Avenged Sevenfold’s concert in Chile to talk about what the band wanted to accomplish with the style of “Hail To The King,” every album being a ‘natural experiment,’ the criticism their albums have received for being different than the other and playing “Hail To The King” live. Shadows also spoke with DG Medios (Spanish/Translated):

“I love playing in Chile. […]” says M Shadows. “The last time, I remember all those guys waiting outside the hotel. That does not happen everywhere in the world.” The group is promoting their sixth album, Hail To The King, which received rave reviews and debuted at number one on the Billboard 200 in its first week. “[…] Nightmare was a hit and people wanted to hear what was coming,” explains Shadows, referring to the good commercial performance of the album. With it, the group also sought to get out of their familiar sounds and explore new ones. Shadows defines the new sound as “more basic, more hymns of Rock/Metal. We took a simpler approach.” And work has brought its rewards. “There are people who approached us and told us, ‘I didn’t understand before, but I really liked the last album.’ We opened a whole new fan base,” says the singer. […] Shadows explain his pleasure of going through South America, “They live and die by Rock. It’s a great place for Avenged Sevenfold.” 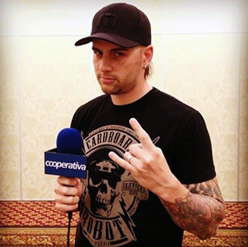