Billboard’s “Featured Album Review” of Avenged Sevenfold’s “Hail To The King” can be seen below. Award-winning music journalist Gary Graff proclaims Avenged Sevenfold ascends to a new level on their own terms, with “Hail to the King” pitching the group into the metal mainstream. Avenged Sevenfold will also cover the new issue of Billboard Magazine. 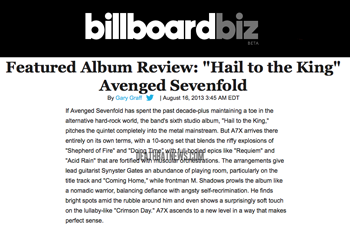