Project, Lights and Staging News has published a lengthy (and fascinating) article on how Avenged Sevenfold’s Shepherd Of Fire Tour stage production came to life, what it takes for Avenged Sevenfold’s crew to put the show together and how they pull it off. A few fun facts: The set designer went through 200 renderings of different versions of the show before it became what it is now. A vacation in Europe inspired the set designer. The head and wings of ‘His Royal Badass’ move. The majority of the set is fire proof. The entire tour is done in eight trucks. You’ll also find out what changes may be made (some of which have already been implemented) to the set this Summer.

Iron Maiden, eat your hearts out…

The band’s latest production, for their Shepherd of Fire tour, making stops at numerous big cities throughout North America this spring, skillfully skirts schlocky heavy metal gags while conjuring what can only be termed a nightmarish otherworldly realm. The tour’s support crew and scenic teams worked with Gallagher Staging & Productions and Pyrotek Special Effects so that the ideas of production manager/set designer Jordan Coopersmith and of A7X bandmembers could come screaming to life (or, as the case may be, back to life).

“A group like Iron Maiden was a huge influence on the band,” says Coopersmith. “Avenged Sevenfold flies a kind of flag from the unbelievable days of ‘80s metal. That’s the music they grew up on.”

But pigeonholing the band’s show as a throwback would be wholly unfair. Yes, A7X’s current production contains familiar elements, but there’s something undeniably classic about the stage design as well. 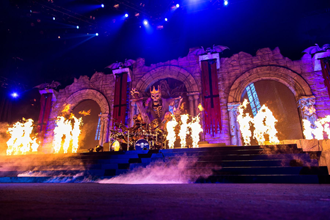