KROQ’s Nicole Alvarez hosted a Q&A session this evening with Avenged Sevenfold at Warner Bros. Records. The band talk about their pinch me moments, the live DVD, their musical guilty pleasures which includes a fantastic story about Synyster Gates and Duran Duran, Splash Mountain Band, what the band listened to while in the studio, how the SoCal music scene has changed since Avenged Sevenfold began, Mr. Qantas, what songs they would like to play live that they haven’t yet and much much more. If you weren’t able to attend or tune in you can watch it here. 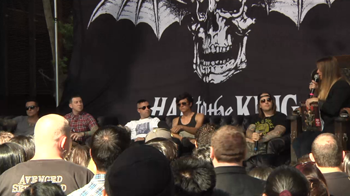