Avenged Sevenfold’s “Hail To The King” has debuted at No. 1 on the Billboard 200 albums chart with 159,000 copies sold. This marks the second No. 1 debut for the band and the largest week for a hard rock album in more than a year.

Congratulations to M Shadows, Zacky Vengeance, Johnny Christ, Synyster Gates and Arin Ilejay on the accomplishment and for making such an incredible album. Thank you to Avenged Sevenfold’s teams at Warner Bros. Records and World Audience for making the release of “Hail To The King” exciting and fun and THE FANS – The band deserved this and you made it happen. This is the start of an amazing era. With that said, today is a day celebrate. Avenged Sevenfold has officially taken their seat on the throne. Hail to the Kings!

– Avenged Sevenfold: “We’re honored that our fans have once again put Heavy Metal at its rightful spot of #1. Celebrate today because this victory belongs to you.”

– Zacky Vengeance: “Thank you for making Hail to the King #1 all around the world. And don’t forget to party tonight like its 6661!”

– You can now visit the official “Hail To The King Goes #1” page here. 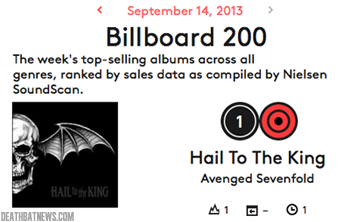