Avenged Sevenfold’s CAA agent Ryan Haralcher spoke with Billboard.biz backstage at the Hollywood Palladium during the band’s free album release concert about Avenged Sevenfold wanting to put on a free show, fans showing their Avenged Sevenfold pride and the Fall tour with Deftones and Ghost.

“The band wanted to do something for their fans,” Ryan Harlacher, Avenged Sevenfold’s booking agent at Creative Artists Agency, tells Billboard.biz. “It was funny, because we said, ‘What kind of spin do you want to put on it? You can tie in retail or other things since it’s the night before the record.’ And they said, ‘No, we just want to play a free show. That’s it.’”

Harlacher says fans lined up outside of the Palladium weren’t afraid to show their Avenged Sevenfold pride.

“For my age, there were only a few bands where it was still cool to wear their t-shirts to their shows — Metallica and Iron Maiden, as far as the rock and metal bands go,” the agent says. “But [Avenged Sevenfold] is one of those bands where there’s like 3,000 people waiting to get tickets for the show and 2,5000 of them were wearing Avenged Sevenfold t-shirts.”

The band will be headlining U.S. arenas in October with support from Deftones and Ghost B.C. – “We could very well come close to selling out every show,” says Harlacher, who was recently featured on Billboard’s 40 Under 40 list and also books such acts as Shinedown, Slipknot and Godsmack. “It’s a really good package.” 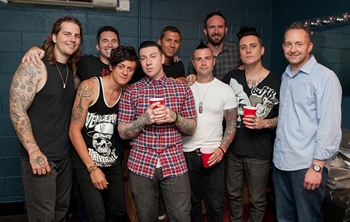