Avenged Sevenfold have revealed their sixth studio album, “Hail To The King,” will be released on August 27th. During an online scavenger hunt, fans were led to different websites that were hosting puzzle pieces made of images and clues. By following the clues and putting together the pieces the album cover, title and release date were unveiled. Avenged Sevenfold will also be playing a free show at the Hollywood Palladium on August 26th to celebrate the album release. A recap of the scavenger hunt including where each puzzle piece was found (one was right here on Deathbat News!) can be read here. Cam Rackam, the artist behind the “Hail To The King” artwork, has also shared the original concept sketch and the original oil painting for the cover. 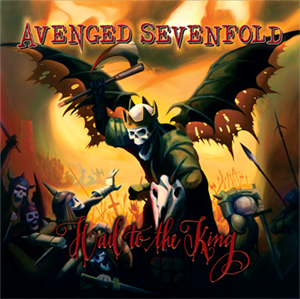