Avenged Sevenfold has been announced as a headlining act at Download Festival 2014. The band will close the show on Friday June 13th, 2014 with support from Rob Zombie. All ticket information can be found here. Before Avenged’s last appearance in 2011, Download’s Andy Copping spoke highly of them and the potential they had to headline the festival one day. After their appearance, Metal Hammer’s Beez stated that, “Of all the big boys Avenged showed everyone how it’s done.” In 2014, Avenged Sevenfold are at the top of the bill and ready to raise the bar even higher.

We are proud to be announced as the first headliner for Download Festival 2014. Friday, 13th June 2014 will mark a momentous occasion in the history of Avenged Sevenfold as we continue the tradition of spectacular Download performances by becoming headliners for the very first time, not just at Download, but at any UK festival. 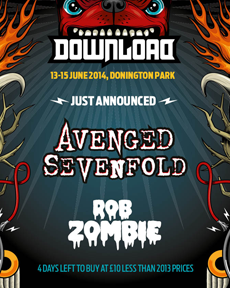