Avenged Sevenfold’s “Hail To The King” went straight to #1 in the UK marking their first time in the top spot. Zacky Vengeance and Metal Hammer’s Alexander Milas both spoke to Official Charts Company about the achievement.

“It has been a hell of a ride thus far and having our first Number 1 album in the UK is a monumental achievement for our fans and us,” guitarist Zacky Vengeance tells OfficialCharts.com. “I remember playing the 100 Club to prove to our fans we were willing to start from the ground up again to earn your respect. Thank you for putting heavy metal back on the throne. We look forward to growing old with you.”

The band have fought off tough competition from Naughty Boy’s debut album, Hotel Cabana (Number 2), to top the Official Albums Chart. According to Official Charts Company sales data, just over a thousand copies separate this week’s top two albums, making it the second closest albums battle this year. (Back in June, there were just 225 copies between Mumford And Sons’ Babel and Michael Buble’s To Be Loved.)

“This is a tremendous achievement, and it’s been a long time coming,” says Alexander Milas, Team Rock Radio host and Editor-In-Chief of British music magazine Metal Hammer, who have been following the band’s career for the last decade. “We’ve watched Avenged Sevenfold’s dogged ascent for years, and their tireless efforts have created the kind of fan base that money and clever marketing just can’t buy.

“Just a few months after Black Sabbath themselves hit the top of the Official Albums Chart, this is nothing less than a landmark, historic turning point,” he adds. “This isn’t just a hugely well-deserved triumph for the band though; in an age of market-driven A&R, it’s proof positive that rock and metal is here to stay. A long-ignored segment of the record-buying public has spoken. Avenged Sevenfold’s victory is a victory for us all.” 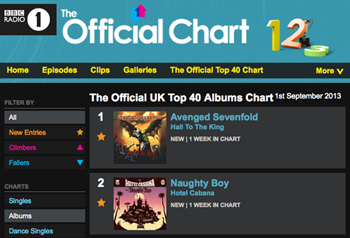