Avenged Sevenfold return to the cover of Rock Sound magazine on sale August 14th. You can pre-order a physical copy of the issue here or purchase the issue now digitally here.

In the new issue of Rock Sound we welcome Avenged Sevenfold to the cover of the magazine as they prepare for the release of sixth album ‘Hail To The King’. The band are fighting fit and ready for anything, a perfect read from one of rock’s finest.

It’s been more than three years after the release of the emotional ‘Nightmare’, but after travelling down a long, hard road Avenged Sevenfold are back in action. In this month’s cover feature, we get intimate with the band to get the inside story of their new album ‘Hail To The King’. 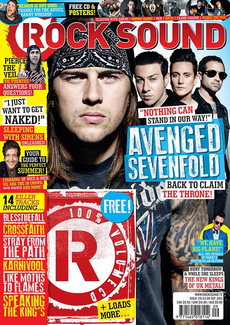