I’ve read quite a few accounts today from the GameStop Managers Conference that Avenged Sevenfold performed as a lead-in to Activision’s Call Of Duty: Black Ops 2 editions announcement. Treyarch have teased that their popular Nuketown map will be invaded by zombies this time around in Nuketown Zombies. Last time “Call of Duty” and Avenged Sevenfold teamed up we got “Not Ready To Die” in the Call Of The Dead expansion pack. Could this mean the two are working together again for Black Ops 2? Nothing has been confirmed but I suspect something is brewing. Call of Duty: Black Ops 2 will be released on November 13, 2012. 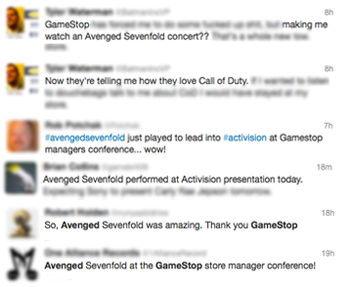 Cam Rackam To Honor Jimmy "The Rev" Sullivan On Sept 8th At The Hyaena Gallery With "Silver."