David Villada has shared photos from the set of Avenged Sevenfold’s “This Means War” music video. David described his experience as “one of the funnest days on set yet, this year. [Avenged Sevenfold] don’t only rock heavenly, they are so nice and humble. My love and respect.” Zenergy Healer also posted a photo from the set. The “This Means War” video has been described as, “a grisly street fight on the dark streets of an urban metropolis. Haunted by dark creatures and lost souls” by director Andrew Baird. 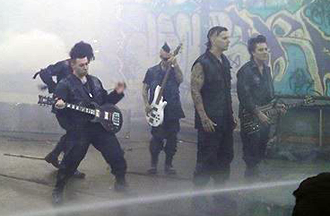