Avenged Sevenfold performed live from the Red Bull Sound Space at KROQ on November 1st, 2013. Photo galleries from the event can be found here. Please check back regularly for updates. 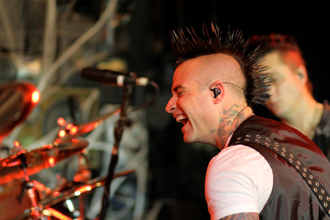 Even though they are now headlining arenas, Avenged clearly had a good time returning to their humble beginnings by playing in a space that feels more like a neighborhood garage than an L.A. club. They also displayed that they are, at heart, a throwback rock ‘n’ roll band that does not need big production, pryro or a large stage to put on a compelling show. They simply need some gear and a roomful of noisy acolytes to make sparks fly. And fly they did, delivering a fiery set that raised the heat more than a little.