Avenged Sevenfold are featured on the cover of Metal Hammer’s December 2013 issue. You can order your copy online here.

Massive doesn’t cover this. For our blockbuster new issue, we go Access All Areas with the biggest metal story of 2013 as we head to the US for a warts-and-all, fly-on-the-wall look at Avenged Sevenfold’s monstrous, globe-conquering attack on the mainstream in all its arena-filling glory. What’s the day-to-day life of being in the biggest metal band in the world like? Is nabbing a Number One album on both sides of the Atlantic is all it’s cracked up to be? Is this the last time we’ll ever see a band make the step up? And just how epic is that Download set going to be?! 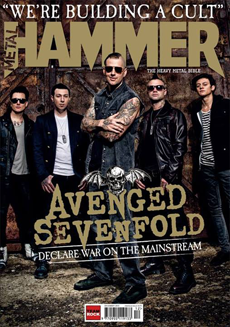