Avenged Sevenfold performed live at Operation Kick Ass in Chula Vista, CA on Sept 14th, 2013. All photo galleries from the event can be found here. Please check back regularly for updates. Back in June, M Shadows called into Rock 105.3 while Avenged Sevenfold were in New York City mixing “Hail To The King” and talked about Operation Kick Ass Festival, wanting to make “an early 90’s metal record in 2013,” Arin Ilejay, what his favorite place to play is besides Southern California, Elton John, getting recognized in public and the strangest place he’s heard an Avenged Sevenfold song. 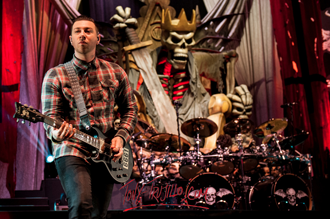