Avenged Sevenfold announced they would be playing three concerts in the UK after leading fans to Wembley Arena via a clue from the Undead Hordes game on The Seventh Lair. After beating the game a message was shown on the screen (the message has since changed) with coordinates to Wembley Arena. The first 50 fans to show up were treated to posters for the three-date run and free tickets. Avenged Sevenfold will play Manchester Arena on Nov 30th (£28.50), Wembley Arena on Dec 1st (£32.25) and Birmingham LG Arena on Dec 5th (£31.75). Tickets go on sale to the general public through Live Nation on Friday, May 17th at 9AM. 02 Pre-sale starts May 15th while Live Nation pre-sale starts May 16th.

UPDATE:
– The Birmingham show has moved from Birmingham NIA to the Birmingham LG Arena.
– M Shadows talks about returning to the UK to Wembley Arena:

The task of unveiling the band’s upcoming UK tour dates fell to their fans who, following a clue from the band, flocked to London’s Wembley Arena where the tour poster was waiting for them. Speaking on their upcoming arena shows, M Shadows had the following to say: “It’s been far too long since we have played for our friends in the United Kingdom. We have been itching to get back since our last appearance at Download in 2011. We are putting the finishing touches on a new album, and can’t wait to share the new songs with you in concert.”

–  Andy Copping (Live Nation London promoter) and Ticketmaster (Thanks Anon) have announced that Five Finger Death Punch & Device will be the support bands in the UK. 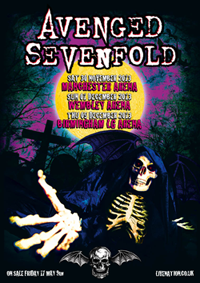 Avenged Sevenfold Are A Pain In The Grass.

The Vault Opens At The Seventh Lair.