Avenged Sevenfold will embark on the Shepherd Of Fire Tour this Spring with HELLYEAH & Adrenaline Mob as their special guests. The full set of dates for this tour can be found below. Ticket information, including VIP packages, can be found here.

Chart-topping hard-rock act Avenged Sevenfold will hit the road in North America for the “Shepherd of Fire Tour,” based on the band’s single of the same name, which hit No. 1 on both the Mainstream Rock and Active Rock charts. “Shepherd of Fire,” from A7X’s current album Hail To The King, is the second single to reach No. 1, in addition to the title track.

The “Shepherd of Fire Tour,” which kicks off on April 12th in British Columbia, will hit arenas in the United States and Canada. The band will also headline the U.S.’s biggest rock festivals, Carolina Rebellion, Rise Above Fest, and Rock on The Range.

Avenged Sevenfold will be joined by Hellyeah & Adrenaline Mob on the Shepherd of Fire Tour as support. 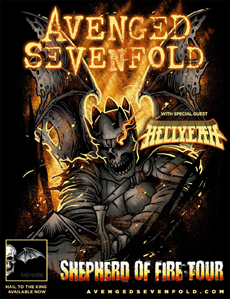